(participating with a private display, open to visitors by appointment) 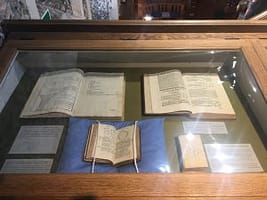 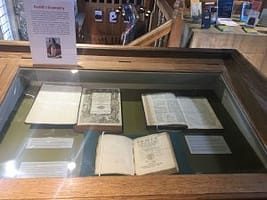 Euclidis elementorum libri XV (Cologne, 1591)
This edition of Euclid has the commentary of Christopher Clavius (1538-1612), a German Jesuit and one of the most important mathematicians of the 16th century. Clavius’s commentary was first published in a small format in Rome in 1574. This lavish folio was aimed at a more elite market and is notable for its fine Mannerist frontispiece.

Elementorum Euclidis libri tredecim (London, 1620)
The anonymous editor of this edition was Henry Briggs (1561-1630), Professor of Geometry at Gresham College and then Savilian Professor of Geometry at Oxford. This was the second edition of Euclid to be published in England, but the first in either Greek or Latin. It was an ambitious undertaking for the printer, combining types of various sizes in two different languages with woodcut diagrams.
This copy has occasional annotations by an early reader, and a crude repair to one of the leaves. An inscription on the front endpaper records that it was presented by Henry Dyson Gabell (Headmaster of Winchester, 1810-1824) to John William Spurrier, in June 1812. It was given to the Fellows’ Library by Hubert Murray Burge (Headmaster, 1901-1911) in 1906.

Henry Savile, Praelectiones tresdecim in principium elementorum Euclidis (Oxford, 1621)
These lectures by Sir Henry Savile (1549-1622) were delivered in 1620 to mark the establishment of the Savilian Chair in Geometry at Oxford. Savile, Warden of Merton College and later Provost of Eton, hoped to raise the standard of mathematical education in England.
This copy was owned and annotated by Sir Edward Sherburne (1618-1702). The title page is inscribed: ‘Foelix Servator Limpidaq Aquaq. Se Fier et Faire. Edw: Sherburns’. Sherburne was a poet and translator of Latin literature, notably Seneca’s tragedies. He owned a large library including two editions of Manilius now in the Bodleian where there is a catalogue of his books (MS RAWL Q.b.3.)

Giovanni Alfonso Borelli, Euclides restitutus (Pisa, 1658)
Giovanni Borelli (1608-1679), the author of this work on Euclid, was Professor of Mathematics at the University of Pisa. He is best known today for his investigations into biomechanics.
This is Sir Edward Sherburne’s copy and is inscribed with the initials of his motto ‘F.[oelix] S.[ervator] L.[impidaq] A.[quaq]’. The book was bound in England in the second half of the 17th century.

Euclidis elementorum sex priores libri recogniti opera Christiani Melder (Leiden, 1673)
This inexpensive pocket edition of Euclid might well have been owned by a student. It bears various signs of ownership and use. The vellum of the upper board has been scored with a pair of compasses, creating a geometrical design inspired by Euclid’s method for inscribing a hexagon within a circle (Book IV, Proposition XV). Other 17th century copies of Euclid have similar patterns on their boards (Eton College and the Wellcome Library). On the rear endpaper is a pen and ink drawing of a cube.
The volume once belonged to William Mason (1724-1797), the poet and garden designer. It was given to Mason’s Alma Mater, St John’s College, Cambridge, but inscriptions indicate that it was soon in private ownership again. It was given to Winchester College in 1917.

Lectio reverendi et doctissimi viri D Isaac Barrow beatae memoriae. In qua theoremata Archimedis de sphaera & cylindro (London, 1678)
Isaac Barrow’s simplified version of Euclid’s Elements was first published in 1655 and translated into English in 1660. It was highly popular and remained the standard version of the text until well into the 18th century. This copy belonged to Charles Scott, a fellow of Winchester College. In 1750 he gave a collection of scientific and mathematical books to the Fellows’ Library, including works by Descartes and Kepler.

Andrea Palladio, The Four Books of Architecture (Venice, 1581)
The works of Euclid had a wide influence in the Renaissance. It has often been suggested that several of Palladio’s architectural designs are based upon the ‘golden ratio’, which was first described in Euclid’s Elements. The Golden ratio is a special number found by dividing a line into two parts so that the longer part divided by the smaller part is also equal to the whole length divided by the longer part. It is often expressed as a diagram like this:

Johannes Kepler, Harmonices Mundi (Linz, 1619)
Kepler is best known today for his important discoveries of laws relating to planetary motion. His work drew on an intimate knowledge of Euclid, whom he hoped to emulate in discovering the fundamental laws which governed the operation of the universe. In this work Kepler set out his ideas about the relationships between geometrical forms, the ratios governing the movement of planets, and musical harmonies.

The Fellows’ Library of Winchester College was established in the early 15th century, soon after the school’s foundation. A small portion of the medieval library remains in situ, alongside several thousand volumes acquired mostly between the early 16th and early 19th centuries. Among the strengths of the collection are medieval manuscripts and incunabula, Bibles and theology, English literature (particularly Old Wykehamist authors), early science, artists’ books and modern fine printing. Readers to the library are welcome by appointment.