(participating with a display and curating the networked exhibition)

Display dates:
19 May – 15 July 2018
(Monday to Friday, 8:30am – 5pm; Saturday, 9am – 5pm; Sunday, 11am – 5pm)
Visitors should check for any changes to the schedule.
Location:
Blackwell Hall, Weston Library, Broad Street, Oxford OX1 3BG [google map]
The display is on the ground floor, and the library is wheelchair accessible.
Tie-in lecture series:
There will be a series of public lectures, ‘Perspectives on Euclid and Geometry’, tying in with the display. The lectures will start at 7pm on Wednesdays through the month of June, and take place in Lecture Theatre 3 (lower floor) at the Mathematical Institute, University of Oxford (Andrew Wiles Building, Woodstock Road, Oxford OX2 6GG).
For the schedule and further information, visit http://readingeuclid.org/events/perspectives-on-euclid-and-geometry/.

1. Earliest complete manuscript of the Elements 888 AD
This celebrated Byzantine copy of the Elements was written in 888 AD by the scribe Stephanos for deacon Arethas of Patras, with further annotations added between the 10th and 14th centuries. The fine parchment and calligraphy cost Arethas 14 gold pieces. Euclid himself wrote the Elements in thirteen books, but many copies including this one have two additional books added by other hands in late antiquity.
MS. D’Orville 301
view the iiif-compliant digitised version of the manuscript on the ‘Digital Bodleian’ website 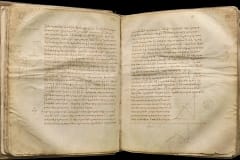 2. The first Latin edition, printed in 1482
Erhard Ratdolt, a German printer based in Venice, produced the first printed Latin edition of the Elements in 1482. It was based on the widely-circulated medieval version of the text by Campanus of Novara (d. 1296) and was extensively illustrated with woodcut diagrams. These were the first mathematical diagrams ever printed and were reportedly cut by Ratdolt himself. His misidentification of the author as ‘Euclid of Megara’ was an often-repeated mistake.
Preclarissimus liber elementorum Euclidis perspicacissimi, Venice: Erhard Ratdolt, 1482
Auct. K 3.19

3. Sir Thomas More’s copy of the 1533 Greek edition
The first published edition of the Elements in Greek was edited by the Basel humanist Simon Grynæus (1493–1541), who presented this particular copy to Sir Thomas More (1478–1535). Grynæus’s text also included Proclus’s fifth-century commentary on the first book. This was edited from a manuscript which he had borrowed from Corpus Christi College, Oxford, and although antiquarian Anthony Wood insinuated that Grynæus had stolen it during a trip to Oxford, the manuscript was indeed returned and remains extant.
Simon Grynæus, ed., Ευκλείδου Στοιχειῶν βιβλ. ιε, Basel: Johann Herwagen, 1533
Byw. C 3.3

4. John Dee and Henry Billingsley’s English Euclid, 1570
This celebrated first English translation of the Elements by Henry Billingsley (d. 1606) was published in 1570 with a lengthy preface by the mathematician and occultist John Dee (1527–1608). Billingsley incorporated commentaries from numerous printed sources, as well as new material from Dee. The latter’s preface outlined numerous uses for mathematics and included a large fold-out chart. The book is famous for the paper pop-ups in Book XI. Most of the extant copies already have the three-dimensional diagrams assembled, but one rare example where the folios with the shapes to be cut out remain intact is at The John Rylands Library at the University of Manchester (shelfmark SC13353C).
Henry Billingsley, The elements of geometrie of the most auncient philosopher Euclide of Megara, London: John Daye, 1570
D 4.14 Art.

5. Edward Bernard’s customised Elements, 1690s
Edward Bernard (1638–1697), the Savilian professor of astronomy at Oxford, composed a polyglot working copy of the Elements by interleaving folios from the Basel 1533, Rome 1594, Pesaro 1619, and London 1620 editions. He was then able to annotate this copy towards his own edition, which was unfortunately never realised, although parts of it were used in the next Savilian professor David Gregory’s edition published in 1703.
Simon Grynæus, ed., Ευκλείδου Στοιχειῶν βιβλ. ιε, Basel: Johann Herwagen, 1533, with material added from other editions.
Auct. S 1.14

6. Henry Savile’s 1620 Euclidean lectures
Sir Henry Savile (1549–1622), the humanist scholar who founded the Savilian professorships of geometry and astronomy at Oxford, delivered a set of Euclidean lectures at the 1620 inauguration of the professorships. These lectures were subsequently published as Savile’s Praelectiones: ‘thirteen lectures on the first of Euclid’s Elements’.
Henry Savile, Praelectiones tresdesim in principium Elementorum Euclidis, Oxford: Johannes Lichfield, 1621
4o S 39 Art.

7. Christopher Clavius’s popular textbook, 1574
Known to his contemporaries as the ‘Euclid of the sixteenth century,’ Christopher Clavius (1538–1612), a Jesuit professor of mathematics at the Collegio Romano, produced one of the most popular compendium editions of the Elements from this period. Reprinted numerous times until 1654, the book was compiled with additional notes from other commentators and Clavius himself.
Christopher Clavius, Euclidis elementorum libri xv. Accessit xvi.de solidorum regularium comparatione, Rome: Vincentium Accoltum, 1574
Crynes 714

8. George Fournier’s tiny edition, 1644
When he first encountered the Elements, Roger North (1651–1734), English lawyer and author, was less than convinced of its utility: ‘Having read Fournier on Euclid’, he wrote, ‘I wondred at the emptyness of that study’. However, once he perceived the logical structure of the propositions, he ‘devoured the science with great greedyness’. This small edition by the Jesuit mathematician George Fournier (1595–1652) was popular with university students.
George Fournier, ed., Euclidis sex primi elementorum geometricorum libri, Paris: Mathurinum Henault, 1644
Savile Cc 29

9. Euclid learns algebra, 1660
In ‘An idea of the education of young gentlemen’, seventeenth-century natural philosopher John Aubrey (1626–1697) suggested that schoolchildren should ‘always have Barrow’s Euclid in their pocket’. Copious use of algebraic symbols by the editor, Cambridge mathematician Isaac Barrow (1630–1677), made for a brief text specially suited to the pocket, and this became one of the most-reprinted Euclidean editions in seventeenth-century Britain, attesting – presumably – to its success with teachers and learners in schools and universities.
Isaac Barrow, Euclide’s elements; the whole fifteen books compendiously demonstrated, London: Printed by R. Daniel, for William Nealand, 1660
Tanner 696

10. Euclid for the mathematical practitioner, 1730
The seventeenth century saw a proliferation of texts on the practical applications of mathematics, which included civil and military architecture, gunnery, navigation, and mechanics. Unsurprisingly, Euclid’s Elements found its way into these books, albeit often in the form of easy-to-digest epitomes. In 1692, Jesuit mathematician Paul Hoste (1652–1700) published a mathematical course in French for military men. It was translated into English by William Webster. This particular copy was owned by the Scottish-born architect James Gibbs (1682–1754) who designed the Radcliffe Camera in Oxford. A large portion of his book collection is now here in the Weston Library.
William Webster, A compendious course of practical mathematicks. Particularly adapted to the use of the gentlemen of the army and navy. In three volumes, London: A. Bettesworth and C. King, 1730
Vet. A4 e.223

11. Euclid in colour, 1847
Predating modernist movements in art and design by more than half a century, mathematical author Oliver Byrne (1810–1880) used bold primary colours and symbols towards a visual explication of Euclidean proofs. On these pages, we see his reframing of Pythagoras’s theorem (Elements book 1, proposition 47), replacing words with elements from the diagram itself.
Oliver Byrne, The first six books of the Elements of Euclid: in which coloured diagrams and symbols are used instead of letters for the greater ease of learners, London: William Pickering, 1847
Johnson d.1883

12. Euclid lives!
Most recently, contemporary print artist Russell Maret has created a personal response to the Elements. Selecting a proposition from each of the thirteen books in Sir Thomas Little Heath’s now standard English translation of the text, Maret combined his prose commentary on geometry, literature and letterforms, with his own reinterpretations of the mathematical diagrams.
Russell Maret, Interstices & intersections: thirteen Euclidean propositions, New York: Russell Maret, 2014
Rec. c. 125

13. Platonic solids
In Book 13, Euclid described the construction of the five regular solids (tetrahedron, hexahedron or cube, octahedron, dodecahedron, and icosahedron) inscribed in a sphere. These shapes had been used by Plato in the Timaeus.
The ‘Platonic solids’ on display were 3d-printed in polylactic acid (PLA) using fused deposition modelling (FDM) at the Bodleian’s Radcliffe Science Library . We thank Richard Smith for his help with the process.

14. Compasses and rules
A collection of antique brass and nickel compasses and dividers, drafting rule and square in wood, and six inch sector in bone. (Private collection)

Credits:
The Reading Euclid project team thanks Sallyanne Gilchrist and Jennifer Varallo at Bodleian Exhibitions for their help in setting up the display at Blackwell Hall, and Richard Smith at Radcliffe Science Library for his help with 3d-printing the Platonic solids.

The University of Oxford is home to the Reading Euclid project, the sponsor of the Seeing Euclid network of exhibitions. Funded by the AHRC, the project is working on the evidence for buying, reading and responding to the Elements of Geometry in Britain and Ireland during the sixteenth and seventeenth centuries. Visit www.readingeuclid.org to hear more about our work on books, annotations, catalogues and more, including experiments in printing Euclid using hand-press technology.
Project team: Benjamin Wardhaugh, Philip Beeley, Yelda Nasifoglu
Website: readingeuclid.org
Twitter: @ReadingEuclid