(participating with a virtual display)

University of Manchester has a unique copy of Billingsley’s first English translation of Euclid’s Elements (London, 1570). Bearing shelfmark SC13353C, the copy is a variant with the six bifolia for the folding figures still intact and bound with the book.

Description of the copy:

The margins of many leaves at the beginning and end have been excised/repaired, possibly due to water and mould damage.

Inscriptions of James Prior on ff. 42r, 200v, 346v and 461v. There is no further information on Prior, though he does not appear in the alumni lists of Oxford or Cambridge. 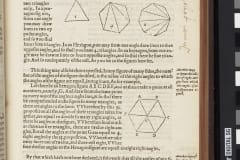 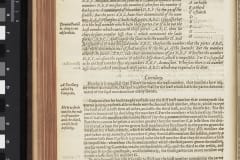 Underlining and corrections in Book One.

Title page: this copy has suffered some damage from water and mould in the past. The margins of many leaves at the beginning and end have been excised/repaired.

The University of Manchester Library holds one of the finest collections of rare books, manuscripts and archives in the world. Both The John Rylands Library and Victoria University of Manchester Library had built up outstanding Special Collections. After their merger in 1972, these collections were concentrated in the magnificent Deansgate Building of The John Rylands Library, in the centre of Manchester.
The collections cover a wide range of subjects: theology and philosophy; literature, drama and music; art and archaeology; science and medicine; economic, social, political and military history; travel and exploration.
The printed collections encompass almost all the landmarks of printing through five centuries: magnificent illustrated books, examples of fine printing, landmark works in typography, key historical texts and exquisite bookbindings. They hold over 4,000 incunables, including the largest collection of Aldines in the world and the second largest collection of works printed by Caxton.
The Library’s manuscript collections cover more than fifty languages, including all the major European and Middle Eastern languages, and numerous Far Eastern ones. They span five millennia, and are written on virtually every medium ever employed. The subject range is vast, encompassing literary, historical, antiquarian, genealogical, biblical, devotional, ritualistic, medical, scientific, legal and administrative texts.
The Library holds several hundred archives of companies, business associations, trade unions, charities, social organizations and religious institutions, as well as landed families.