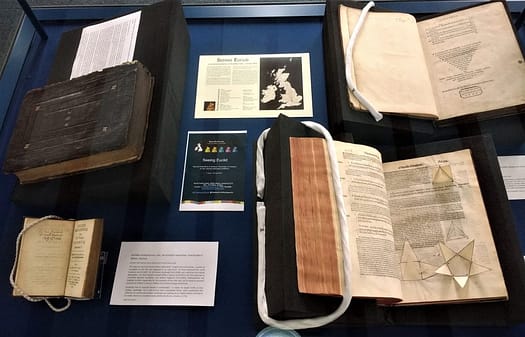 Display dates:
4 June – 15 July 2018 (Monday to Friday, 9am – 6pm)
Location and access:
Harold Cohen Library, Ashton Street, Liverpool, L3 5TX [further location details] [google map]
The display will be on the first floor, with ramp access and lifts.
It is accessible to the public; visitors will need to sign in and out at the Harold Cohen Library main entrance to gain access through the entrance barriers.

This is the earliest edition of Euclid’s Elements held by the University of Liverpool, and the first to be printed in France, by Henri Estienne in 1516. The text is in Latin, translated from the Greek by Bartolommeo Zamberti, and revised by Jacques Lefèvre d’Etaples – French theologian and humanist – who added the commentaries of Campano, Theon and Hypsicles.
As this image clearly shows, our copy was part of a British Museum duplicates sale of 1787. 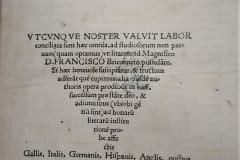 This edition, containing the first six books of the Elements, was printed in 1550 by Johannes Herwagen (1497-1558). Herwagen was responsible for the publication of a series of editions between 1533 and 1558, and was the first printer to inset Euclid’s diagrams into the text.
This particular copy came to the University as part of the bequest of Thomas Glazebrook Rylands (1818–1900), a wire-manufacturer from Warrington. Rylands was one of the Library’s most important donors. He left 2700 items to the Library, including 19 medieval manuscripts and 116 books printed before 1536.
Rylands’ bookplate on the front paste-down is accompanied by a bookplate and inscription that reveal another of the book’s previous owners: John Lee (1783–1866). Lee studied mathematics at Cambridge, later taking his L.L.D and joining the College of Advocates in 1816. Alongside his legal career and duties as landlord and country gentleman, Lee pursued wide-ranging interests. He helped to found the Astronomical Society, built his own observatory, and was friends with many of the leading astronomers in Europe. He was elected to both the Society of Antiquaries and the Royal Society, amongst other learned societies, and unsuccessfully ran for parliament on no fewer than six occasions.
Lee’s inscriptions indicate that he bought the book at a Southgates auction on December 15th 1828. Long before the book was purchased by Lee, however, it was bound and inscribed in multiple places by a Robert Cannoy. Cannoy bound his Euclid alongside Sebastian Munster’s Rudimenta Mathematica (1551), providing these two works with a fine binding, which includes his initials and crest (sadly printed upside down on the front board).
As well as marking his own possession of the book, Cannoy also left marks to indicate another prior owner. An inscription in Cannoy’s hand on the title-page of Munster’s work reads: “formerly belonged to King Charles the first.”

The elements of geometrie of the most auncient philosopher Euclide of Megara. Faithfully (now first) translated into the Englishe toung, by H. Billingsley, citizen of London.
Euclid
London: John Day, 1570
SPEC Ryl.P.2.13

This was the first full edition of Euclid’s Elements to be printed in England, and the first time the work had been translated into English. It includes a preface by English mathematician, astronomer, and student of the occult, John Dee (1527–1608). The edition boasts both a striking engraved title-page – with images of philosophers, and of women representing Arithmetic, Music, Astronomy and Geometry; and a number of pop-up diagrams – which give the book a 3D, interactive aspect.

This copy of a work by Thomas White (1593–1676) – English priest and scholar – contains an inscription on the first free endpaper in an early hand: “Ex dono amicissimi Drs. Caroli Scarboris July 23 1658”. Dr. Sir Charles Scarburgh (1615–1694) was a physician and natural philosopher. His close friends included William Harvey (1578–1657), the first physician to accurately describe circulation, and William Oughtred (1574–1660), mathematician and Anglican minister responsible for the invention of the slide rule; and he acted as personal physician to Charles II, James II, William III and Prince George of Denmark.
Scarburgh had an especial interest in mathematics — a subject he taught briefly at Caius College, Cambridge. He is said to have had a remarkable library, with a particularly fine collection of mathematical books. Scarburgh was working on an English edition of Euclid at his death, which was completed and published by his son, Charles, in 1705.

Other works of Euclid at the University of Liverpool include:

This pocket-sized Latin edition, issued by English mathematician Isaac Barrow (1630-1677), contains the inscription of William Stanley Jevons (1835-1882), a Liverpool-born economist and logician. On the title-page are two further inscriptions:

This early, compact edition has a number of ownership marks, many of which have been obscured – or in the case of a bookplate, torn out. There is also a pencil drawing of a building on one of the endleaves:

Euclid’s Elements of geometry. In XV. books: with a supplement of divers propositions and corollaries . . . Published by the care and industry of John Leeke and George Serle, students in the mathematicks.
London: George Sawbridge, 1661
SPEC Y6.3.12

This was the third complete edition of Euclid in English, and includes a reprint of the John Dee preface that first appeared in the 1570 translation. The edition also contains the first English printing of Euclid’s Data. With engraved frontispiece portrait of Euclid and verse by G. Wharton:

Special Collections & Archives of the University of Liverpool Library includes manuscripts and archives, early and finely printed books and science fiction collections. As well as the depth and range of the printed collections our holdings are notable for their medieval and Renaissance manuscripts; literary archives; a diverse body of personal papers, including the archives of the Rathbone family, Victorian social reformer Josephine Butler and Lord David Owen, a former Chancellor of the University; an extensive University archive; and the business archive of the Cunard shipping company.
The book collections contain over 70,000 volumes in the full range of classical and European languages taught by the University and include many of the landmark texts in Classical and English literature, history, architecture, medicine, science and travel. There are more than 270 incunables, nearly 400 works printed 1501 – 1536 and over 10,000 pre-1801 English books. The collections are strong in limited editions and late 19th-mid-20th century private press books, with many examples of Liverpool printers and authors; they are also rich in the publications of nineteenth century printing clubs.
For further information on the items on display or to make an appointment to view them, contact the Special Collections & Archives via email at scastaff@liverpool.ac.uk or by telephone at 0151 794 2696.