(participating with a virtual display)

To view these items in the reading room, contact the library via email shl.specialcollections@london.ac.uk or by telephone at 020 7862 8470.

Euclid was one of the major sections of the mathematical library assembled by the mathematician and mathematical historian Augustus De Morgan (1806-1871): a library described by contemporaries and by twentieth-century writers alike as ‘an unrivalled collection of what may be termed the classics of mathematical literature’ and ‘one of the finest accumulations of books on the history of mathematics in the country’. This library came to the University of London as one of its library’s founding collections in 1871.
De Morgan’s editions of Euclid range from the editio princeps of 1482 to Isaac Todhunter’s extracts of 1862. They cover six languages, numerous publishing centres, all major formats, and various audiences. Owners prior to De Morgan have left their mark on some editions, most outstandingly the seventeenth-century poet and politician Edmund Waller. Some are enhanced by De Morgan’s own annotations about the place of the particular edition within the publishing history of Euclid, its rarity, or its provenance. De Morgan wrote about one of his Euclids (1578) in Companion to the Almanac for 1853, and showed his interest in Euclid from a didactic and geometrical perspective in The Connexion of Number and Magnitude: An Attempt to Explain the Fifth Book of Euclid (Taylor & Walton, 1836).
This virtual display is primarily of editions of Euclid from the library of Augustus De Morgan. It includes one from the eighteenth-century library of Graveley Parish, near Ely in Cambridgeshire: a testimony to the importance of Euclid in general education.
For more information about Augustus De Morgan and his library, see Karen Attar, ‘Augustus De Morgan, his Library, and his Reading’, in The Edinburgh History of Reading, ed. by Mary Hammond and Jonathan Rose (Edinburgh: Edinburgh University Press, forthcoming 2019).

Euclides restitutus, siue, Prisca geometriae elementa, breuiùs, & faciliùs context
Giovanni Alfonso Borelli
Pisa: Francesco Onofri, 1658
[DeM] L6 [Euclid – Elementa – Latin] SSR
Giovanni Alfonso Borelli’s Euclid attempts to clarify Euclid’s propositions. Whilst the text is freely available online, Augustus De Morgan’s copy is rendered unique by the inscription of the seventeenth-century poet and politician Edmund Waller (1606-1687) on the half-title. De Morgan attempted to verify the inscription by asking the British Museum and the literary critic and antiquary Bolton Corney (1784-1870) for other examples of Waller’s signature. Whilst the British Museum had none, Corney confirmed the genuineness of the book’s provenance, through a sample of Waller’s signature at a younger age. De Morgan tipped both replies into the book, and summarised their messages. 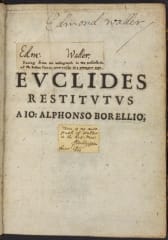 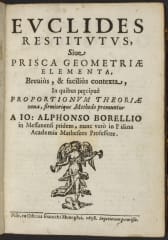 Eukleidou Stoicheiōn biblia 13 = Elementorum Euclidis libri tredecim
London: W. Jones, 1620
[DeM] L.6 [Euclid – Elementa – Greek & Latin] fol. SSR
This Greek and Latin edition of Euclid’s first six books is the first edition of Euclid in either language to be published in England. Augustus De Morgan’s copy celebrates Henry Briggs (1561-1630), its unnamed editor, with two manuscript notes pasted in. An anonymous note from Ward attributes ‘authorship’ to ‘the famous Mr. Henry Briggs the great improver of Napier’s system of logarithms’. De Morgan added: ‘This edition is undoubtedly superintended by the famous Briggs of logarithm notoriety. Some catalogues call it an edition of all the books: but I never saw more than the first six in any copy’.
A previous owner has added some diagrams and occasional markings and verbal annotations.

Eukleidou Stoicheiōn biblia 13 = Elementorum Euclidis libri tredecim
London: W. Jones, 1620
[Graveley Parish] 961
This 1620 Euclid contains anonymous notes concerning clerical matters on its initial leaf in a seventeenth-century hand. The same owner has annotated the early part of the text in Latin, distinguishing between Euclid’s problems, demonstrations, constructions and conclusions.
An inscription reveals that it subsequently belonged to the Church of England clergyman and religious controversialist Thomas Nowell (1730-1801) whilst at Oriel College, Oxford, where he was an undergraduate between 1746 and 1749 a Fellow from 1753. The next owner, another clergyman, was Henry Trotter (d. 1766), rector of Graveley parish, near Ely in Cambridgeshire. Trotter bequeathed it, along with the rest of his (largely theological and historical) library to his successors for the use of the neighbouring clergy.

Euclidis Megarensis mathematici clarissimi Elementa, libris xv
Paris, 1602: i.e. Leiden, Jean de Tournes, 1578
[DeM] L.6 [Euclid – Elementa – Latin] fol. SSR
This Euclid follows a 1566 edition by François de Foix, comte de Candale, and augments it with de Foix’s seventeenth and eighteenth books. Augustus De Morgan ‘picked [the book] up on a mean stall in the open air, at a very low price’. He consequently used it to write an article, ‘On the difficulty of correct description of books’ (Companion to the Almanac for 1853), in which he stressed the importance of looking at colophons, as the title page was forged. De Morgan’s notes on the book itself describe it as ‘rather scarce’, and praise it as ‘worth the attention . . . of any one who attends to the geometrical notions of the period.’

Les six premiers liures des Elements d’Euclide: demonstrez par notes, d’vne methode tres-brieve & intelligible
Pierre Hérigone
Paris: G. Morel, 1644
[DeM] L.6 [Euclid- Hérigone] SSR
Pierre Hérigone was the first editor to use symbols for Euclid’s expositions. This version of his Euclid is a reissue of an edition first published in 1639. The work recycles and amends parts of his Cursus mathematicus (1634), such that De Morgan noted on the front pastedown: ‘This is not Hérigone’s Course of Mathematics, but a selection and abridgment’. This copy was formerly owned by Abigail Baruh Lousada (d. 1833), who translated Diophantus into English and published some papers in a mathematical miscellany. De Morgan purchased it from the sale of her books by Sotheby in 1834.

Euclidis Megarensis philosophi acutissimi mathematicorumq[ue] omnium sine controuersia principis op[er]a
Euclid; ed. by Campano da Novara
Venice: Paganino Paganini, 1509
[DeM] L.6 [Euclid – Elementa – Latin] fol. SSR
An early Italian owner has annotated this Euclid, edited like its predecessors by the mediaeval Italian mathematician Campano da Novara, extensively throughout. Much later in England, the copy belonged to James Orchard Halliwell, who sold a fine collection of mathematical books at low prices by auction in 1840 before focussing on English literature. Augustus De Morgan bought copiously at the sale. He recorded on this book: ‘The Editor of Fabricius doubts the existence of this edition, and with apparent good reason’; ‘The fourth printed Euclid, and by much the rarest of them all. There is no copy in the British Museum.’

Euclidis Elementorum libri xv Graecè & Latinè
Euclid; ed. by Stephanus Gracilis
Paris: Hiérosme de Marnef and Guillaume Cavellat, 1573
[DeM] L6 [Euclid – Elementa – Greek & Latin] SSR
This copy of an octavo Euclid (without Euclid’s proofs of propositions) probably came to England in the sixteenth or seventeenth century, to judge from the inscription on the title page of one John Godden: unidentified, although a person of this name was vicar of Leigh between 1568 and 1622. The edition first appeared in 1557 and another reprint appeared in 1598. It was used particularly in Jesuit colleges. Augustus De Morgan’s comments include: ‘This is one of those editions which are called Euclid (Gr. Lat.)—but which give only enunciations: according to the stupid old myth which attributes all the demonstrations to Theon.’

Euclid’s Elements of Geometry
Euclid ; ed,. by John Leeke and George Serle
London: G. Sawbridge, 1661
[DeM] L6 [Euclid – Two or more works – English] fol.
Augustus De Morgan has not marked this book, his earliest English-language Euclid except for John Day’s edition of 1570. A seventeenth-century owner, N. Mackay, has added some page numbers to the beginning of John Dee’s preface and has marked a sentence towards the top of page 4 of Dee’s preface with a scruffy manicule: ‘And, where and when he will lack an Unit, there and then, that particular thing shall be Discreated’.

Resolutio omnium Euclidis problematum aliorumque ad hoc necessario inuentorum vna tantummodo circini data apertura
Giovanni Battista Benedetti
Venice: B. Cesano, 1553
[DeM] L6 [Euclid – Appendix – Benedetti]
The Italian Giovanni Battista Benedetti, a largely self-educated mathematician who has been rated one of the ablest geometers of his day, wrote this work when aged just 22. De Morgan homes in on its significance in the beginning of his annotation of 29 February 1852 pasted on to a front flyleaf: ‘This book solves all the problems of Euclid with one opening of the compass only’ (achieved formerly by Ferrari and Tartaglia, but less systematically). De Morgan revisited the note in 1857 to record: ‘A …man afterwards did some of this without seeing Benedetti’s book’.

Geometriae Euclidis primam quae post inventam typographiam prodiit editionem
Abraham Gotthelf Kaestner
Leipzig: litteris Langenhemianis, [1750].
[DeM] L6 [Euclid – Kaestner] SSR
This early bibliography of Euclid describes in sixteen pages the editio princeps of Euclid of 1482, with reference to some later editions, such as those of 1491 and 1509, and that edited by Clavius, all held by Augustus De Morgan. De Morgan in his notes frequently referred to Kaestner’s historical and bibliographical work. This book was a gift to De Morgan from the scholar and prominent book collector John Bellingham Inglis (1780-1870). This copy includes a manuscript copy of a note by Franz Woepcke on Arabic translations of two lost works of Euclid, tipped in at the back.

Senate House Library is the central library for the University of London and the School of Advanced Study. It offers Arts, Humanities and Social Science Research Collections and Special Collections in the heart of London’s student and research community. The Library opened in 1877, and moved to its current home at Senate House in 1937.
To view any of these items on virtual display in the reading room, please contact the library via email or by telephone at 020 7862 8470.