(participating with a display in Lasdun Hall)

Introduction to the display at the RCP
It might surprise you to know that fellows of the Royal College of Physicians (RCP) used to study mathematics as well as medicine. Since the foundation of the RCP in 1518 fellows were required to be ‘groundedly learned’, meaning they should be well educated in a range of subjects.
The small display of books, manuscripts and portraits at the RCP shows some of this breath of learning, with several editions of Euclid’s works from the RCP’s library.

Virtual display: mathematical physicians
William Harvey (1578–1657) gave his personal library to the RCP in 1651. The collection included many medical books, but also titles on ‘Geometry, or Geography, or Cosmography, or Astronomy, or Music, or Optics, or Natural History, or Mechanics’. Harvey’s library was lost in the Great Fire of London in 1666, but a larger replacement collection was donated by Henry Pierrepont, first Marquis of Dorchester (1607–1680) in 1680. It included over 800 books about mathematics and other related subjects.

1. Bibliotheca marchionis Dorcestriae (Dorchester library catalogue). Manuscript by unknown author, 1664. Henry Pierrepont, first Marquis of Dorchester, was made the College’s first ever honorary fellow. Though he trained as a lawyer, he was interested in both medicine and mathematics. Dorchester collected a library of over 3,000 books. His daughter Grace gave his books to the College after his death in 1680.
Dorchester divided his library into four sections: mathematics, law, medicine and philology (meaning subjects such as history, religion and literature). Mathematics is the largest of the four sections. In the 17th century the subject of ‘mathematics’ included not only geometry and arithmetic, but also related fields including astronomy, astrology, architecture, music and military engineering. These topics and more are well represented in Dorchester’s library.
Dorchester’s library included multiple copies of Euclid’s Elements of geometry: 10 are listed on these two pages of the catalogue alone. 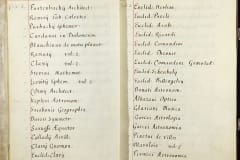 2. Sir Charles Scarburgh (1614–1694). Oil on canvas, attributed to Jean Demetrius, c1660. Charles Scarburgh was chief physician to King Charles II and a founding member of the Royal Society.
A portrait of Scarburgh hangs in the RCP Lasdun Hall. In his portrait, Scarburgh is shown with symbols of his expertise. On the table in front of him are a watch, two mathematical solids, a book of anatomy and a celestial globe. The background shows St Peter’s basilica in Rome. These features represent Scarburgh’s abilities in mechanics, mathematics, medicine, astronomy and astrology, and his knowledge of the classical learning of the ancient Greeks and Romans.
The mathematical solids, known as ‘Platonic’ solids, are an icosahedron and a dodecahedron. Scarburgh was particularly interested in maths. He translated some of Euclid’s Elements of geometry into English, and the diarist John Evelyn reported that Scarburgh had an excellent collection of mathematical books. 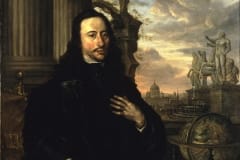 3. Euclid’s Elements of Geometry. Manuscript copied by unknown scribe, 15th century. This is the oldest copy of Euclid’s works in the Royal College of Physicians’ library. This version of Euclid’s works was originally edited by the Greek mathematician Theon of Alexandria (c335–405 AD). We don’t know who owned this book, or who gave it to the College. Someone has written ‘my book’ in Greek at the top of the first page, but not left their name.

4. Sex priores libros Geometricorum elementorum Euclidis demonstrationes. Oronce Fine, published in Paris, 1551. The French map-maker and mathematician Oronce Fine (1494–1555) wrote a commentary on Euclid’s work. A 16th century reader has added notes in Latin in the margins of this copy of the book in very small, very neat handwriting. Sadly, we don’t know who wrote these notes because they didn’t sign their name.

5. The elements of geometrie. Euclid, translated by Henry Billingsley, published London, 1570. This is the first English translation of Euclid’s Elements of geometry. It uses unusual folding paper diagrams to illustrate the chapter on three-dimensional geometry.
In 1642 George Osborne, a mathematician from Hull and author of almanacs, owned this book. The last two pages of the book were missing, and he copied them out by hand to fill in the gap. In 1649, Joseph Osborne, possibly George’s son, recorded that the book was worth 40 shillings (2 pounds), a fair price for a book of this size.

6. Kitāb tahṛīr usụ̄l li-Ūqlīdas = Elementorum geometricorum libri tredecim. Euclid, translated by Muḥammad ibn Muḥammad Nasị̄r al-Dīn al-Tụ̄sī, published in Rome, 1594. This is the first edition of Euclid’s Elements of geometry printed in Arabic. Euclid’s works were translated into Arabic and studied heavily during the Islamic Golden Age of the 8th to the 13th centuries AD.
This work is one of around a hundred books that were rescued from the old College building during the Great Fire of London in 1666. The covers of the book are stamped in gold with a coat of arms showing ermine with three lions. These arms may indicate ownership by John Blythe of Clifford’s Inn.

7. Elementorum libri XV. Euclid, translated by Federico Commandino, published Pisa, 1572. Cats are not known for their mathematical prowess. It’s unlikely that the owner of these dirty paw prints was particularly interested in Euclid’s thoughts about parallelograms. The presence of these grubby marks reminds us that the books preserved in the RCP library and elsewhere have had long and varied lives, and that they have not always been treated with the reverence we might expect.

The Royal College of Physicians is England’s oldest medical royal college, founded in 1518. It has had a library since its foundation, with early donors to the collection including Thomas Linacre (c1460–1524) and William Harvey (1578–1657). Sadly, most of the library collections were lost in the Great Fire of London, and the college library was refounded with the gift of the library of Henry Pierrepont, Marquis of Dorchester. Dorchester’s library, and the RCP’s subsequent collection, was not limited to medical works, and the library is rich in mathematics, natural sciences, travel and other topics of interest to the college’s ‘groundedly learned’ fellows. It includes many annotated volumes, including approximately 160 books associated with the Elizabethan mathematician John Dee (1527–1609). The rare books collections – numbering some 23,000 pre-1900 titles – are catalogued online, and available for research by advance appointment.