See also the Library’s Rare Book of the Month for May 2018.

Euclid, Elementorum libri XIII, 1609. This version of the Elements was printed in Wittenberg, and shows Ashley’s annotations and signature on the title page – ‘Ro. Ashley’. The heading references Philip Melanchthon, who wrote an introduction to the Elements in 1536/7. According to Dr. Jon Balserak, of the University of Bristol: “Melanchthon was known for being intensely interested in astrology, being convinced that God had given human beings the planets and stars as signs (Genesis 1: 14) which God intended for them to use as guides. The study of maths was, in part, supposed to be an aid to the study of the movements of the stars and planets for use in understanding astrology … the handwritten notes [seem to be a] panegyric on the use of Euclid to understand ‘cognitio motuum caelestium (the knowledge of the motions of the heavens)’. The middle paragraph mentions marvelling at Euclid’s philosophy and discusses geometry and astronomy.” 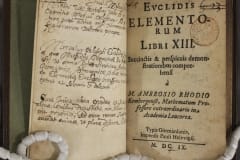 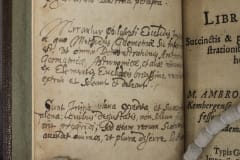 Euclid, Elementorum libri XV, 1607. This version of the Elements was printed in Cologne. It is heavily annotated by Robert Ashley on the verso of the title page, as shown here. It has a common variation of his signature on the title page: Asheley. As can be seen here, the paper has become damaged and fragile over time and the book requires conservation work. If you would be interested in sponsoring the cost of repair, please email the Librarian: [email protected].

Euclid, Elementorum Libri XV, 1607. This is a two volume work, printed in Frankfurt (only volume 1 is on display). It has been edited by Christoph Clavius. The sixteenth book of the Elements was added by François de Foix, Comte de Candale.

Sir Henry Savile, Praelectiones tresdecim in principium elementorum Euclidis, 1621. Sir Henry, the humanist scholar who founded the Savilian professorships of geometry and astronomy at Oxford, delivered a set of Euclidean lectures at the 1620 inauguration of the professorships. These lectures were subsequently published as Savile’s Praelectiones: ‘thirteen lectures on the first of Euclid’s Elements’. The first Savilian Chair of Geometry was Henry Briggs.

Giovanni Battista Benedetti, Resolutio omnium Euclidis problematum aliorumq[ue] ad hoc necessario inuentorum una tantummodo circini data apertura, 1553. This is the earliest Euclidean work in the Library and was printed in Venice. As with the other works on display, it is illustrated with geometrical diagrams throughout. The title page shows the large woodcut printer’s device of Bartolomeo Cesano.

Middle Temple is one of the four Inns of Court, and had a small library prior to 1540. An early account about the Inns of Court states that Middle Temple ‘had a simple library in which were not many bookes besides the law and that library by meanes that it stood always open, and that the learners had not each a key unto it, it was at last robbed of all the bookes in it’. The library was re-founded in 1641 when Robert Ashley (1565-1641) bequeathed his own collection of 3,700 books, and £300 to employ a Library Keeper. Ashley was a lawyer, but equally a translator and bibliophile. The library has retained the majority of his collection, and it now forms the core of the Inn’s Rare Book and Manuscript collection. It is notable for a number of items, as well as for containing the largest holdings of John Donne’s personal library of any institution. The first manuscript catalogues appeared in the 1680s, and the first printed catalogue was issued in 1700, Bibliotheca illustris Medii Templi Societatis (ESTC R38816).
The collections were developed by subsequent donations and acquisitions. Today the Library holds approximately 250,000 volumes of textbooks, law reports, journals and Parliamentary papers and is one of the most important legal libraries in the country. While the collection consists predominantly of legal material, there is still a wide range of subject matter available to consult, including works on geography, topography, philosophy, theology and literature. This is due to the manner in which the collections were developed during the 17th, 18th and 19th centuries to respond to the needs of the barristers and students: legal education provided by the Inns during these periods was more wide-ranging. The nature of legal education changed in 1852 with the establishment of the Council of Legal Education and the introduction in 1872 of compulsory examinations for the Bar. At that point the Library started to focus its collecting policies primarily on legal works. This coincided with an expansion in legal publishing and the introduction of the official series of the Law Reports.
Over the centuries, the Library has been housed in various locations at the Inn, including in a set of chambers beside Middle Temple Hall. In the 19th century it was moved into purpose-built rooms which later became the Parliament Chamber, when a new purpose-built library was opened by the then Prince of Wales in 1861. That building was damaged beyond repair during World War II and was demolished. The library’s current building was designed by Sir Edward Maufe and was opened by Her Majesty Queen Elizabeth The Queen Mother in 1958.