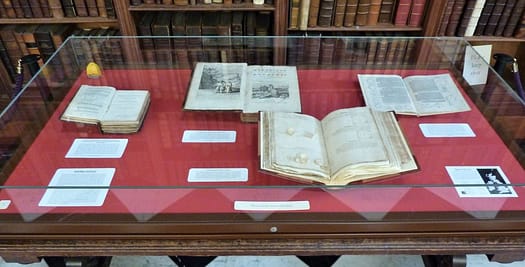 Thomas Bradwardine, Geometria speculative
(Paris: Guy Marchant, 1495)
Thomas Bradwardine’s book on geometry, illustrated throughout with remarkable marginal diagrams, is thought to be the first printed book on mathematics by an Englishman. Bradwardine’s major sources were the mathematical writings of Euclid and Aristotle and the Geometria speculative covers all the major topics of elementary geometry, including Euclidean theorems. Bradwardine died of the Black Death on 26 August 1349, only forty days after his consecration as Archbishop of Canterbury.
Acquired in 2006 with the help of the Friends of Lambeth Palace Library, the Friends of the National Libraries, and the Lambeth Diploma Association.
VA649.B7 [**]

Systemata geometrica (17th century)
This volume of manuscripts contains a number of works on a wide-range of topics and includes two copies of an anonymous treatise on Euclidean geometry, written in two different hands. These texts are copiously illustrated with numerous geometrical drawings together with a number of remarkable pop-up geometrical diagrams, offering a beautifully-engineered and uniquely three-dimensional representation of the complex theorems discussed within.
MS 711

Euclid, Euclidis quae supersunt omnia (Oxford, 1703)
This is the first complete edition of Euclid’s works in Greek, printed in 1703 at the Sheldonian Theatre in Oxford. Edited by the Scottish mathematician, David Gregory (1659-1708), the text was based on and superceded an earlier incomplete edition produced in Basel. In addition to an engraved frontispiece and title vignette by M. Burghers, there are numerous woodcut diagrams. This copy is one of 250 copies of the first edition printed on large paper, out of a total print run of 750.
Sion E23/Eu2G2

Charles Lutwidge Dodgson, The fifth book of Euclid treated algebraically, so far as it relates to commensurable magnitudes (Oxford, 1868)
Charles Lutwidge Dodgson better known by his pen name Lewis Carroll, was a writer, mathematician, logician, Anglican deacon, and photographer. As a teacher of mathematics Dodgson revered Euclid, who dominated his professional work, and he devised fresh approaches to Euclidean theorems while refusing to tamper with the original texts. Euclid, he insisted, had to be seen plain. Instead, Dodgson sought to clarify difficulties and to make Euclid more accessible to modern minds. In Euclid and his modern rivals (1879), Dodgson presented a forceful argument against all who had meddled with Euclid’s text. He advocated continuing to use the Elements as the geometry textbook in schools over and above the more modern geometry textbooks that were replacing it.
Sion (P)Scott P 187.12

Lambeth Palace Library is the historic library and record office of the Archbishops of Canterbury and the principal repository of the documentary history of the Church of England. Its collections have been freely available for research since 1610. The records held here date from the 9th century to the present day, and their broad scope reflects the office of Archbishop as head of the Province of Canterbury, his national and international roles in leading the Church of England and the Anglican Communion worldwide, and the wealth and power of Archbishops in past centuries which enabled them to collect books and manuscripts of the highest quality and significance. In 1996 Lambeth Palace Library took into its care all the early collections of Sion College, the historic library of the City of London clergy, which comprise manuscripts, pre-1850 printed books, and pamphlets. Its collection complements that of Lambeth with a key focus on the Church, but a rich diversity of other subject material.