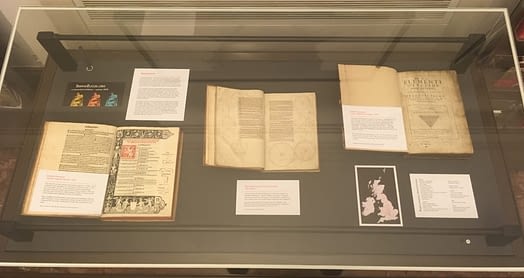 The very first printed version of Euclid’s Elements, in 1482, used a medieval Latin translation by Campanus of Novara made, in turn from an Arabic version. Venice-based translator Bartolomeo Zamberti prepared a fresh version which was printed in 1505: the first new Latin translation of the Elements made in the era of print. Some sheets were reprinted for this 1510 reissue.

Many readers found Zamberti’s Latin less comprehensible than the older translation, and in response a version printed at Paris in 1516 interwove the two texts, doubling the length and complexity of the book.

The Italian mathematician Federico Commandino published his own new translation of the Elements into Latin at Pesaro in 1572, an important step in the production of a reliable Latin version of the book, and the source for a number of later versions in various vernaculars. This Italian version was made by him or – perhaps more likely – his students, and issued at Urbino three years later. Like earlier editors and translators he included books 14 and 15, not written by Euclid.

This particular copy was acquired in 1614 by the bibliophile Thomas Howard, Earl of Arundel (1585–1646), whose library was donated to the Royal Society by his grandson Henry Howard, Duke of Norfolk, in 1667.

This manuscript of Euclid’s Elements of Geometry, based on a translation attributed to Adelard of Bath, was written in England towards the end of the 13th century. It is particularly notable for its wide margins which are carefully filled in with geometric diagrams.
Formerly bound with texts on astronomy and arithmetic (now MS/15), it was presented to the Royal Society by the herald and antiquary Peter Le Neve FRS on 12 June 1718.

The Royal Society Library dates from the foundation of the Society in 1660. Among its many strengths are internationally important collections of manuscripts, printed books, journals and artworks, which provide an unrivalled record of the development of science for more than 350 years.

On the Euclid display at the Royal Society, see Philip Beeley and Rupert Baker’s blog entry in The Repository. See also Louisiane Ferlier’s on the mathematical treasures among the Royal Society collections.